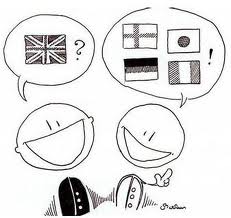 Every year our organisation runs a competition in which the students write an essay in English about a given topic, last year’s topic was Science based. This year, students were asked to explore the question 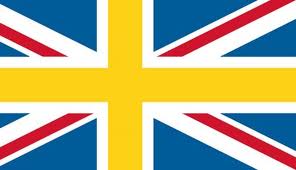 Every year our organisation runs a competition in which the students write an essay in English about a given topic, last year’s topic was Science based. This year, students were asked to explore the question ‘Why English?’ As the topic is linked to my subject the English department was asked to promote the competition to the students and we made it our first assessment for years 7-9 this year.

I must admit that when I first launched the idea to my classes (with a groovy 6 minute video promoting the greatness of English, which I can’t post here as it has students from the school in it and Sweden has VERY strict child protection laws) I felt a little like the British colonialists may have felt telling everybody that English is the only language worth knowing and that you’re nobody without it. But now a few weeks later I have started to receive the work from the students and some of their responses have really got me thinking.

I have been lucky to have been born into a country where English is my first language because, like it or not, English is the World Language, the Lingua Franca or whatever you wish to call it. Sadly that may have come about through years of occupation and colonisation but that is how it stands. Strange as it seems, it is only now that I am truly beginning to appreciate how that has given me a huge advantage. 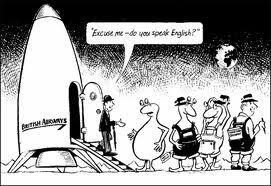 As a qualified English teacher, there is nowhere in the world that I could not go and work. There are very few countries where I would find it impossible to get by. I can speak to people from all corners of the globe. My students have written about how they hope to study abroad, communicate when travelling, take careers as doctors or lawyers but to do this they have had to undertake a vast journey across the minefield of a new language when I was given a free ride. I have worked abroad before but in Vietnam my students were privileged. Many came from countries where they had already learned some English, many had at least one English speaking parent and most were financially privileged having only been educated at the best institutions with the best teachers. I was always impressed by the level of English spoken by BIS students but then it was also an expectation – they have to pass an English proficiency test before acceptance at the school. They are judged on their English speaking skills from the very beginning. The school also has an ‘English Only’ policy during the school day where all conversations in all classes are conducted in English. Staff are asked not to use any local language with the students (this is at the International school, the school will soon be opening a bilingual school in which the curriculum will be delivered in both English and Vietnamese). This is fair enough, the school is a fee paying International institution where parents pay to improve their children’s English.

IES is different. It is not a fee paying school and there is no entrance exam. It is a bilingual school where students undertake some subjects in English (such as Maths, Science and Music) and others in Swedish. Many of the resources are written in English. And as the school employs a number of Swedish teachers alongside Native English speakers, the students are able to speak either language according to the teacher they are addressing. Working in a bilingual school can present difficulties for somebody who has never had to learn the language – sometimes my mentor class get into heated discussions all conducted in Swedish, or during a recent motivational assembly for Years 8 & 9 where I could only laugh at the pictures as I had no clue as to the content. But this is my problem: being lucky has made me lazy. I haven’t made much effort to learn another language as in the UK we are instilled with the “Everybody speaks English anyway, so why bother, attitude”

Everybody speaks English anyway, so why bother?

This is an attitude I remember from my own school days when far less academic value was placed on the study of languages where most people adopt a “do well in the proper subjects such as Math, English and Science and we’ll overlook any bad grades in Spanish…” line of thought. I must admit that at the time I was happy to think like this too but as an adult I look back at those days and wish that I had reassessed my values. For me personally it would have been far better to excel in languages than Maths or Science.

I don’t wish to enrage my mathmatical and scientific colleagues but I have not had any situations when I have seriously thought ‘Damn, I wish my maths was better!’ as there is normally a calculator (thank goodness for that app on a mobile phone) or somebody who is better at maths than me, around. I have, however, had plenty of occasions when I have wished that I could speak another language. Take for instance the time when a train ground to a halt during a particularly aggressive typhoon in Japan and everybody disembarked. Miles away from home I did not know what to do. A number of failed attempts in Japanese led me to the only other Western looking person on the train. He spoke Spanish. Why had I allowed myself to forget everything that I had learned in school? Thank goodness, he also knew very limited English. Enough for us to share a taxi and split the cost of an otherwise expensive journey. Yes, the English are lazy when it comes to languages.

Not just lazy but arrogant too.

There is an arrogance that also pervades the British attitude to learning another language. I believe that the British are by nature particularly xenophobic – alone on our small island for so long, followed by the extraordinary feat of colonising over 1/4 of the globe has led to a belief that we are by nature better than everybody else. I know of intelligent teachers and members of management who quite openly demonstrate a lack of respect for other languages and I know of schools where the attitude of management towards language departments is significantly inferior to that of ‘showpony’ subjects. Don’t get me wrong, I’m not saying that one subject is more important than others but surely parity will offer students a more well rounded and, dare I say it, tolerant education? I understand that many people may not feel the need to learn another language if they do not travel but I believe that the discipline of learning another language is something that us brits could benefit from. I do not mean to criticise here as I include myself when I say that Brits are too lazy or arrogant to try – if that were not true I would speak Japanese, Vietnamese and Swedish fluently by now.

What I like most about IES is that the students are motivated and eager to impress, not because they have paid a lot of money to attend the school but because they see the value of English in their world and they want to be ahead of the game. English is central to the school’s success and it’s a great feeling to be a third of a department that is so highly regarded by management, students and parents. For her Why English? essay a student in Year 7 wrote how she came to the school in Year 5 with very little command of the English language but determined to learn. She wanted to learn English in order to read her favourite books, ‘Harry Potter’ in their original language (having already read them in Swedish and Russian) and she was amazed by the beauty of the English language when she did. So inspired was she that she wrote to JK Rowling in English. Her most treasured possession is the reply that she received, knowing that she could read it comprehensively in English.

So in conclusion I would like to wish all of my students the best of luck in the Why English competition, not that they need it. Anybody who can master a language with so many anomalies has got to be pretty smart:

Lets face it
English is a stupid language.
There is no egg in the eggplant;
No ham in the hamburger
And neither pine nor apple in the pineapple.
And while no one knows what is in a hot dog,
you can be pretty sure it isn’t canine.
English muffins were not invented in England;
French fries were not invented in France.We sometimes take English for granted.
But if we examine its paradoxes we find that
Quicksand takes you down slowly.
Boxing rings are square.
And a guinea pig is neither from Guinea nor is it a pig.
Sweetmeats are candies, while sweetbreads,
which aren’t sweet, are meat.

If writers write, how come fingers don’t fing.
If the plural of tooth is teeth,
One goose, two geese.
So one moose, two meese?
Is cheese the plural of choose?
One mouse, two mice; one louse, two lice,
One house, two hice?
Shouldn’t the plural of phone booth be phone beeth
If the teacher taught, why didn’t the preacher praught,
Or the grocer groce, or hammers ham?

If a vegetarian eats vegetables,
What the heck does a humanitarian eat!?
Why do people recite at a play,
Yet play at a recital?
Park on driveways and drive on parkways?
Ship by truck, and send cargo by ship…?
Have feet that smell and noses than run?
How can the weather be as hot as hell on one day
And as cold as hell on another

You have to marvel at the unique lunacy
Of a language where a house can burn up as
It burns down,
And in which you fill in a form
By filling it out
And a bell is only heard once it goes!
How can a slim chance and a fat chance be the same,
while a wise man and a wise guy are opposites?

English was invented by people, not computers
And it reflects the creativity of the human race
(Which of course isn’t a race at all)
That is why
You get in and out of a car, and on and off a bus.
When the stars are out they are visible
But when the lights are out they are invisible.
And why it is that when I wind up my watch
It starts,
But when I wind up this poem,
It ends.

One thought on “Why English?”