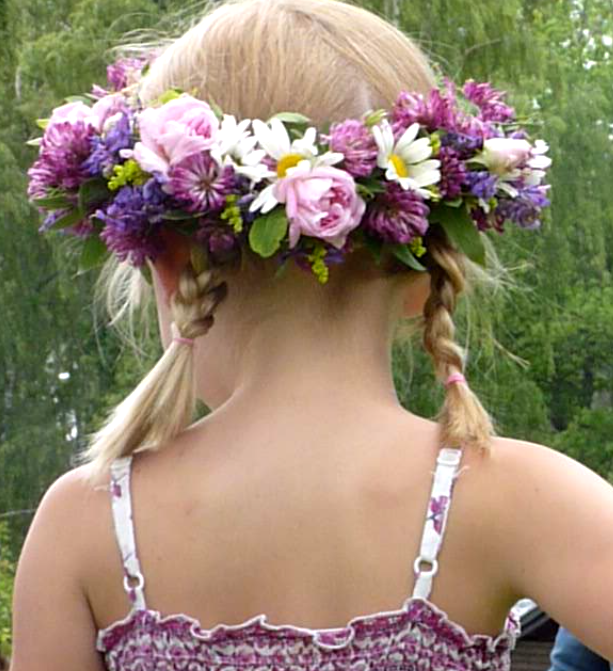 “Why, this is very midsummer madness! “ (Twelfth Night) Not so long ago Sweden was celebrating Valborg to welcome in the spring but it seems that Valborg is only the warm-up act to the biggest

“Why, this is very midsummer madness! “ (Twelfth Night)

Not so long ago Sweden was celebrating Valborg to welcome in the spring but it seems that Valborg is only the warm-up act to the biggest party of the year, Midsummer (Midsommar in Swedish). This is the time of year when Swedes throw off their usual stoicism for a night of wild abandonment, often heavily influenced by copious amounts of homemade snaps. I was particularly eager to witness my first Swedish Midsommar celebration, albeit from a safe distance!

The first rule of Midsommar is to get out of the city: this is a festival that celebrates Mother Nature and the Great Outdoors, so the majority of Swedes head off to a summerhouse by the lake. This is probably sensible as Sweden’s strict drinking laws mean that the consumption of alcohol in public is prohibited and can carry large fines in the city (as well as a policeman forcing you to throw away your very expensive alcohol). For those without an invite to a summerhouse, most cities will provide a Midsommar celebration in a local park. Skansen in Stockholm is probably the most well-known city venue and draws hundreds of visitors. Whilst these celebrations are, without doubt, an enjoyable experience, I wanted something more intimate for my first Midsommar. We went out to Fullerö, a small complex on the shore of Lake Mälaren where my boyfriend’s parents own a summerhouse. 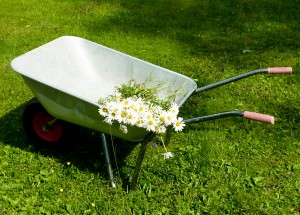 Midsommarsafton is a National holiday in Sweden and usually falls on the Friday between the 19th and 25th of June. It is generally a festival to celebrate the summer solstice, the longest day of the year. Although we are too far south for midnight sun here in Västerås, sunlight was still visible on the horizon well after midnight and by 2am dawn is once again beginning to break. It is unsurprising that the Swedes are so happy to celebrate the long summer days given that they will shortly be plunged into another long, dark and bitterly cold winter.

Midsommar is also a celebration of fertility, as well as long-held beliefs that magic is most active around this day of the year. This leads to a tradition in which young girls pick flowers on Midsommarsafton to dream of their future husband. Incidentally, I picked some flowers and had a horrific nightmare about getting shot by an armed robber. I really hope that this is not my future husband!

In Sweden, it is traditional to make a flower garland to wear around your head. I happily made mine only to discover that only very small children and one other woman (who was probably crazy) wore them at the party I attended. I still wore mine with pride however, even though I did end up with flies and mosquitoes buzzing around me (perhaps that’s why this tradition seems to be a dying art?!). 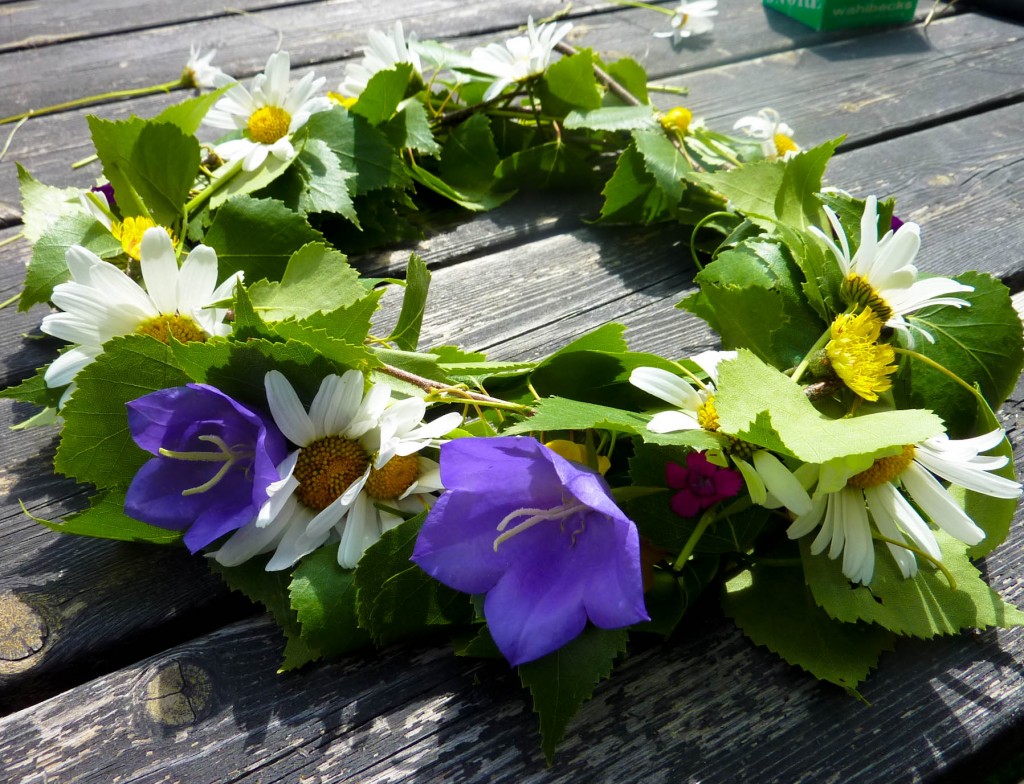 This is a large wooden cross with two rings dangling from it. It is covered with birch and flowers (which is good because it looked rather like a crucifixion was going to take place when I first saw the large wooden cross) and erected in a central area. Traditional songs and dances such as ‘Little Frogs’ take place around the pole – this is where women and children (mainly) hop around pretending to be various woodland animals, whilst the rest of the family sit watching and drinking.

In small lakeside communities it is one of the rare occasions that Swedes come out of their summerhouses and socialise with each other. The dancing will be followed by a raffle and games where the children can win smågodis (candies). 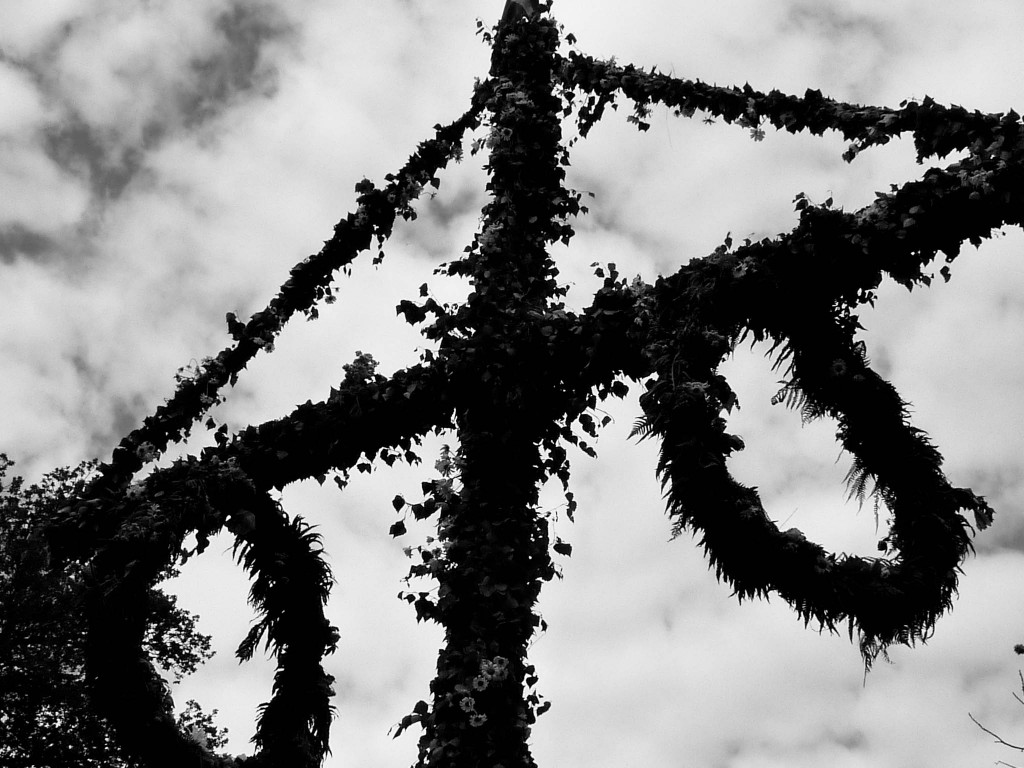 Like the Christmas Julbord, Midsommar brings its own traditional food. On this day families will sit down together to eat pickled herring, sausage, meatballs and boiled potatoes served with sour cream and dill. This will most likely be followed by Jordgubbstårta, a delicious sponge-cake covered with strawberries and whipped cream. And then the party can really begin. Bryggor (jetties) all over the country will be decked out with marquees, tables and chairs and the drinking will begin until the early hours.

And so another crazed Midsommar passes and summer vacations will start. Most Swedes will retreat back to their summer houses for a few weeks of cycling, kayaking and bathing. And many will hope that their drunken antics of Midsommar will be long-forgotten in the depths of winter…