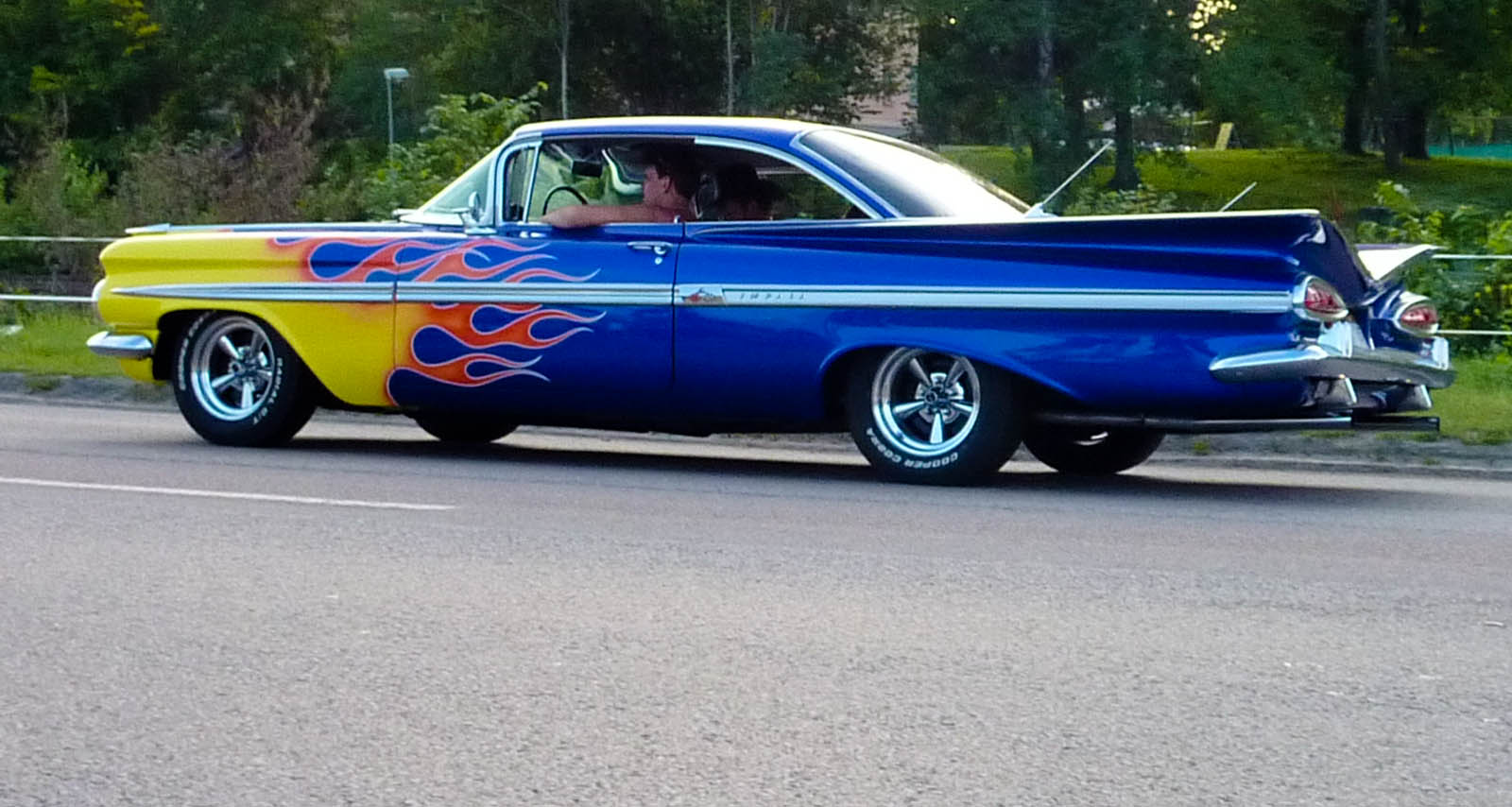 This time last year I was preparing to make the move from Vietnam to Sweden and I wrote a post about Västerås, the Swedish city that was to become my home. Now, here I am a year later preparing to leave Västerås to go travelling, and July is certainly a great month to have as a last month in the city. There are two reasons for this: Cityfestival and Power Big Meet, two annual events that bring this sleepy city to life!

I like Västerås a lot, but there is a limit to what you can do in the city and many people tend to favour Stockholm when searching for entertainment. However, the last two weekends have really given the people of Västerås something to get excited about.

Västerås has a small airport that is used by Ryanair and is listed on their website as ‘Stockholm Västerås’. In reality it is as much a part of Stockholm as Northampton is of London, and it takes at least an hour to reach Stockholm from Västerås. Many visitors to Sweden arrive at the tiny airport and are immediately shuttled off to Stockholm in the Ryanair Flygbuss (Flight bus), never setting eyes on the city in which they arrived. For the majority of the year this might not be such a shame, but if your visit to Sweden happens to coincide with either the Cityfestival or Power Big Meet then you should spend a night or two in Västerås to enjoy the carnival atmosphere. Here’s what you can expect. 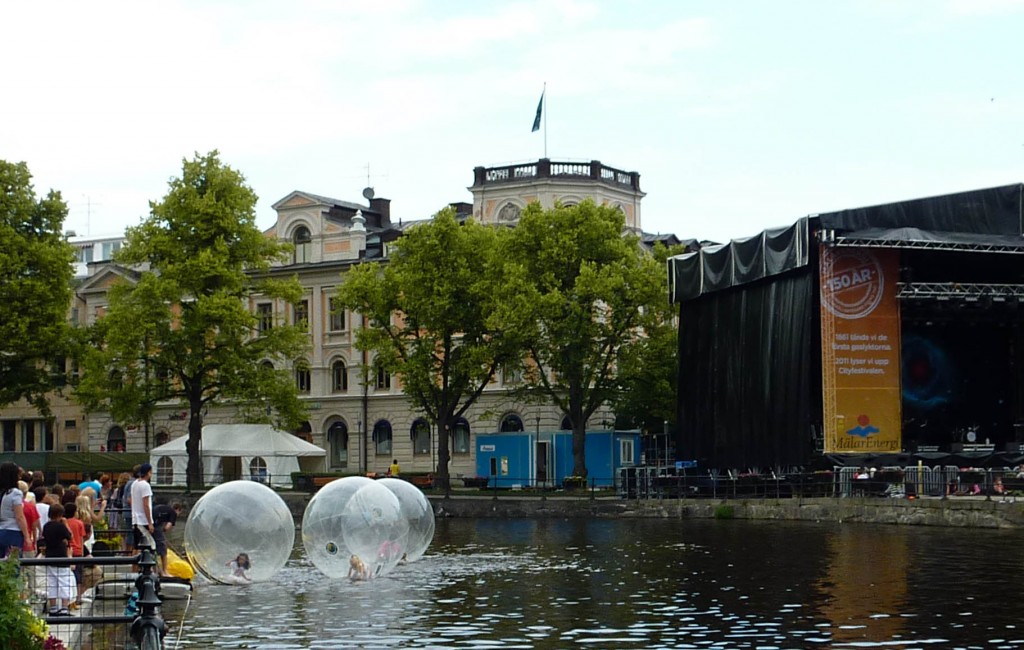 This year the city’s festival took place on June 30th to July 2nd and the aim of the event is to ‘market the attractive destination of Västerås and generate growth [for the city]’. For three days the city centre was transformed by market stalls, fairground rides, food stands, and hoards of people strolled down the busy streets. In the town square a large dance tent had been set up where people could try out fast-paced zumba routines, 70s disco or partnered dancing, and a browse around the food stalls offered the chance to eat food from Thailand, Germany, and Holland (amongst others), as well as the usual Swedish offerings of kebab and hamburgers. By night the stage played host to a number of Sweden’s biggest artists, such as The Ark, Petter and September, all with an entry fee of only 50 Kronor (about £5), which is cheap by Sweden’s standards. This didn’t stop the majority of people from standing on the other side of the river where the view was almost as good, the crowds not so large, and there was no entry fee; the only downside being that alcohol could not be consumed, and the police cycled around the crowds asking people to empty out their beer cans. I am pretty sure that the majority of people who were drinking from Coke bottles had some vodka in there too though!

The most fun was probably to be found at the riverside where a company called ‘Funballz’ had set up three inflatable balls that floated on the river, whilst children, and later drunk adults, ran around inside like possessed hamsters in a wheel. Two girls in particular caught the crowd’s eye as they rolled around inside whilst photographing each other and posting the photos on Facebook. My favourite event of the weekend was the outdoor rave that ran from 6-10pm on the Saturday in the main high street of Västerås. I think that it is probably the most bizarre thing that I have seen in Sweden, given that the Swedes are generally a shy and reserved nation, so I was somewhat surprised to see a handful of (admittedly, mainly hippy) people dancing around, at teatime, and in broad daylight, to Jean Michel Jarre. This crowd grew in number as we watched and before long we too joined in, swept up in the spirit of enlightenment and freedom. Or something like that.

Here is my Västerås cityfestival video, you HAVE to see the Raving Baby!!

The following weekend Västerås hosted the annual Classic Car show ‘Power Big Meet’ from July 8th – 10th. This event is a must for anybody who is interested in classic American cars as there are some pretty amazing cars to be seen, but even if you don’t like cars it is worth a visit just to check out the general hillbilly atmosphere and to sit out on the sidewalks with the rest of the city, enjoying a beer or two. Unlike the City Festival the police seem a bit more relaxed on Power Big Meet, and as long as you are not drawing too much drunken attention to yourself then you will probably manage to keep your beers. If Greased Lightning is your thing then you’ll love this event! 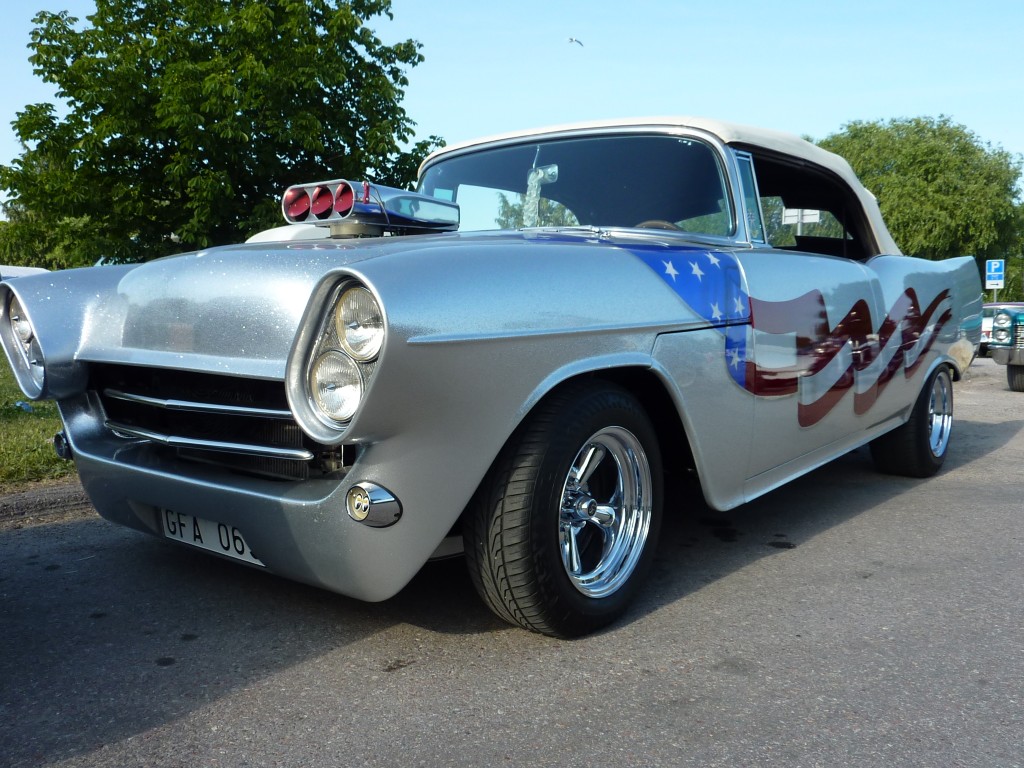 Generally the show takes place at an airfield just out of town; this is where the serious business of checking out cars, exchanging parts and making contacts is done by the car enthusiasts. For those who just want fun then the city centre is the place to be in the early evening when the cars begin to cruise around the city ring-road: music blaring and beers a-plenty (presumably not the driver). Girls hang off the back, guys lean out of windows and everybody wants to be seen. Friday night is when the good cars cruise and this is a slow sedate cruise to show off some meticulously well-kept and excruciatingly expensive cars. On Thursday and Saturday night it’s more of a free-for-all where it seems that anything goes. 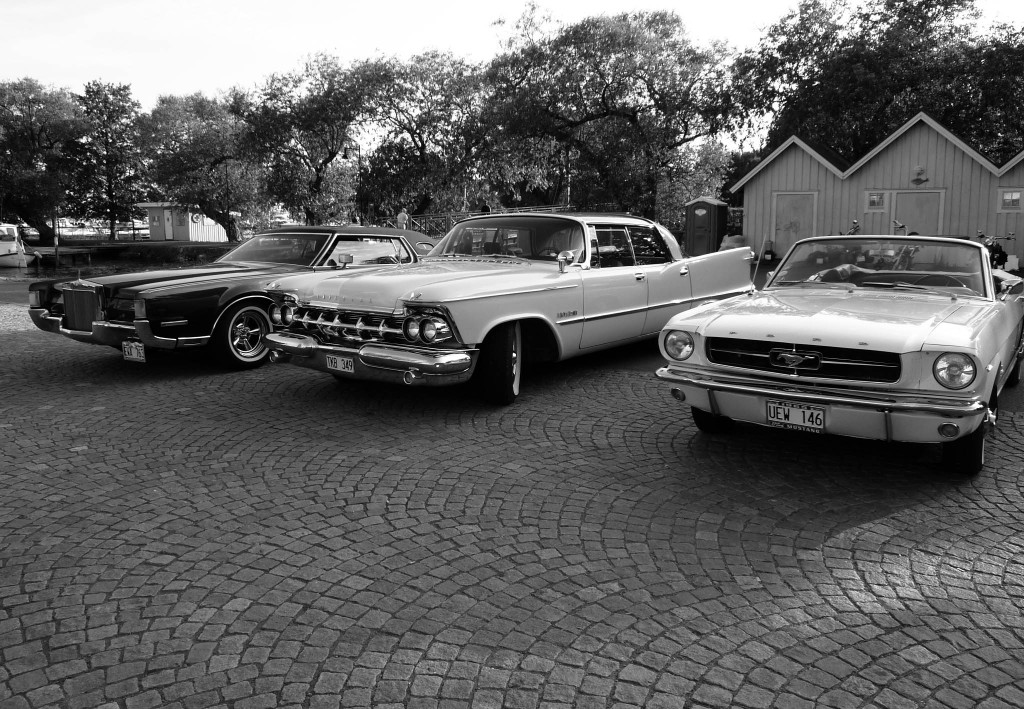 All of this is offset by food stalls, markets, and even a temporary church stand offering immediate wedding ceremonies! Sweden again managed to surprise me when I encountered a band playing in a pond on a walk through the local park. How can you not love a band playing in a pond?! Expect to see a lot of flags – not just Swedish or American – cowboy hats, leather waistcoats and ponytails: you are entering Hicksville!

If you are planning a visit to Sweden and you want to see something beyond Stockholm, then check out Västerås. Even better, plan your trip so that it coincides with Västerås’ biggest annual events. You will have a lot of fun. 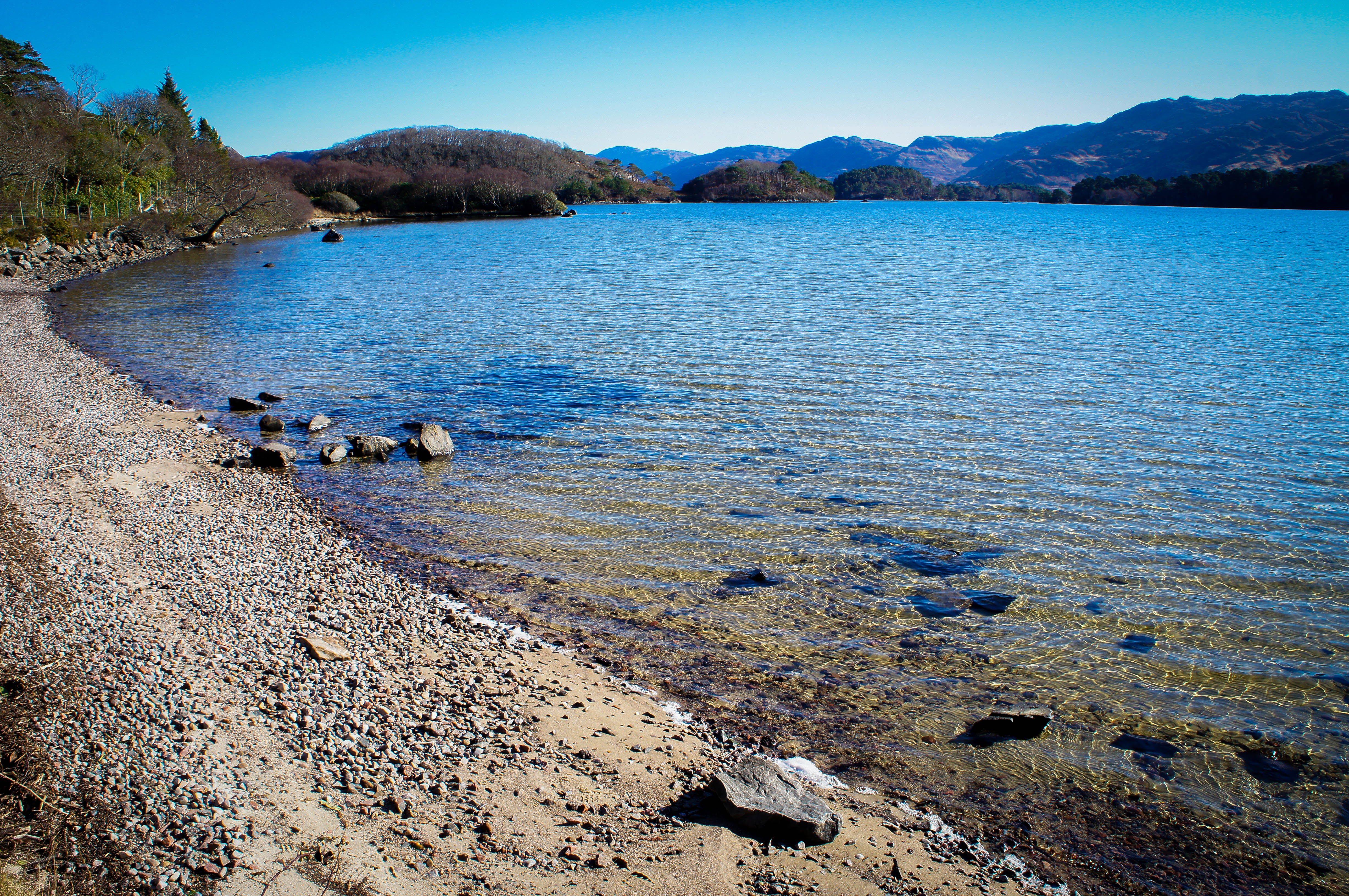 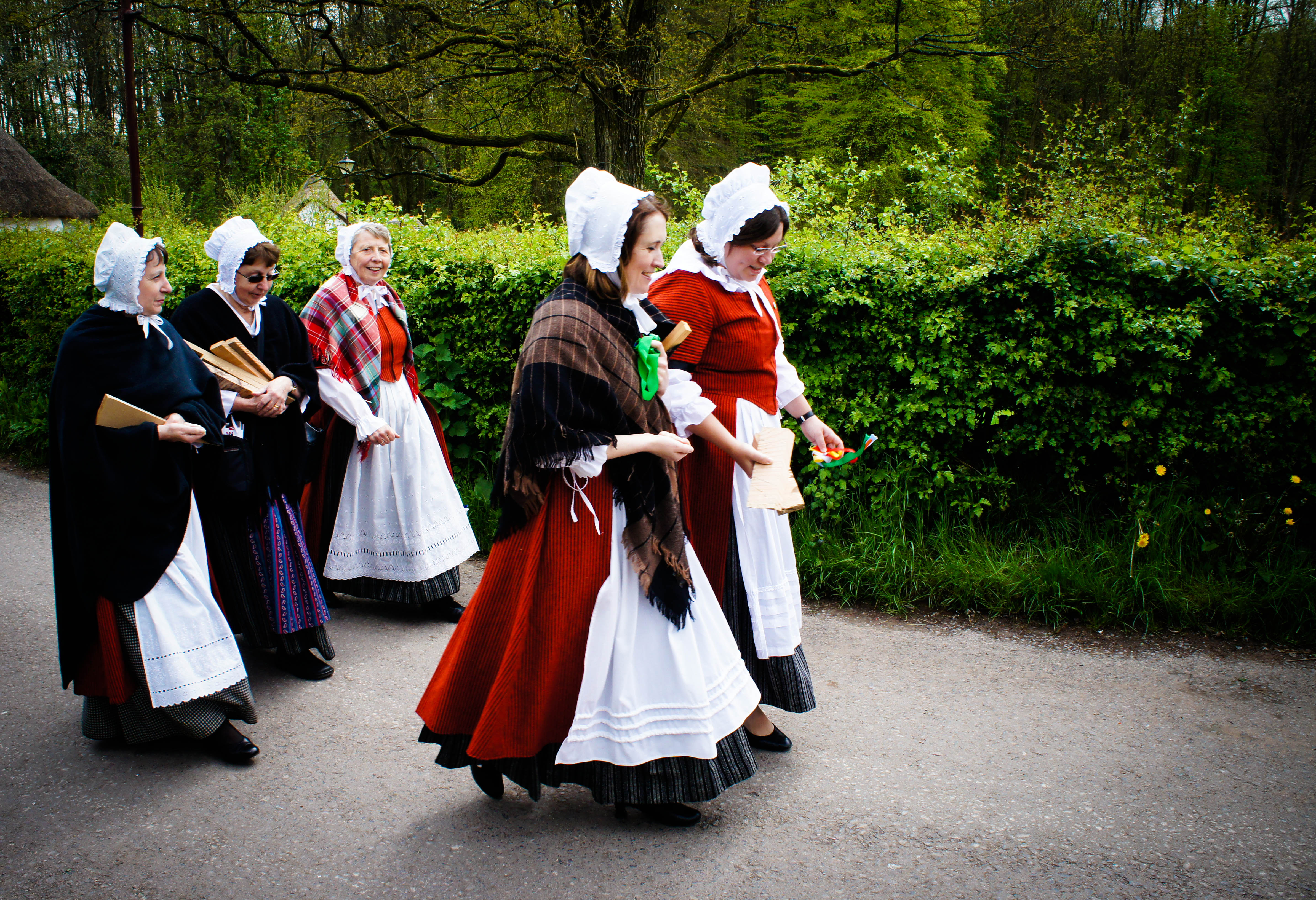 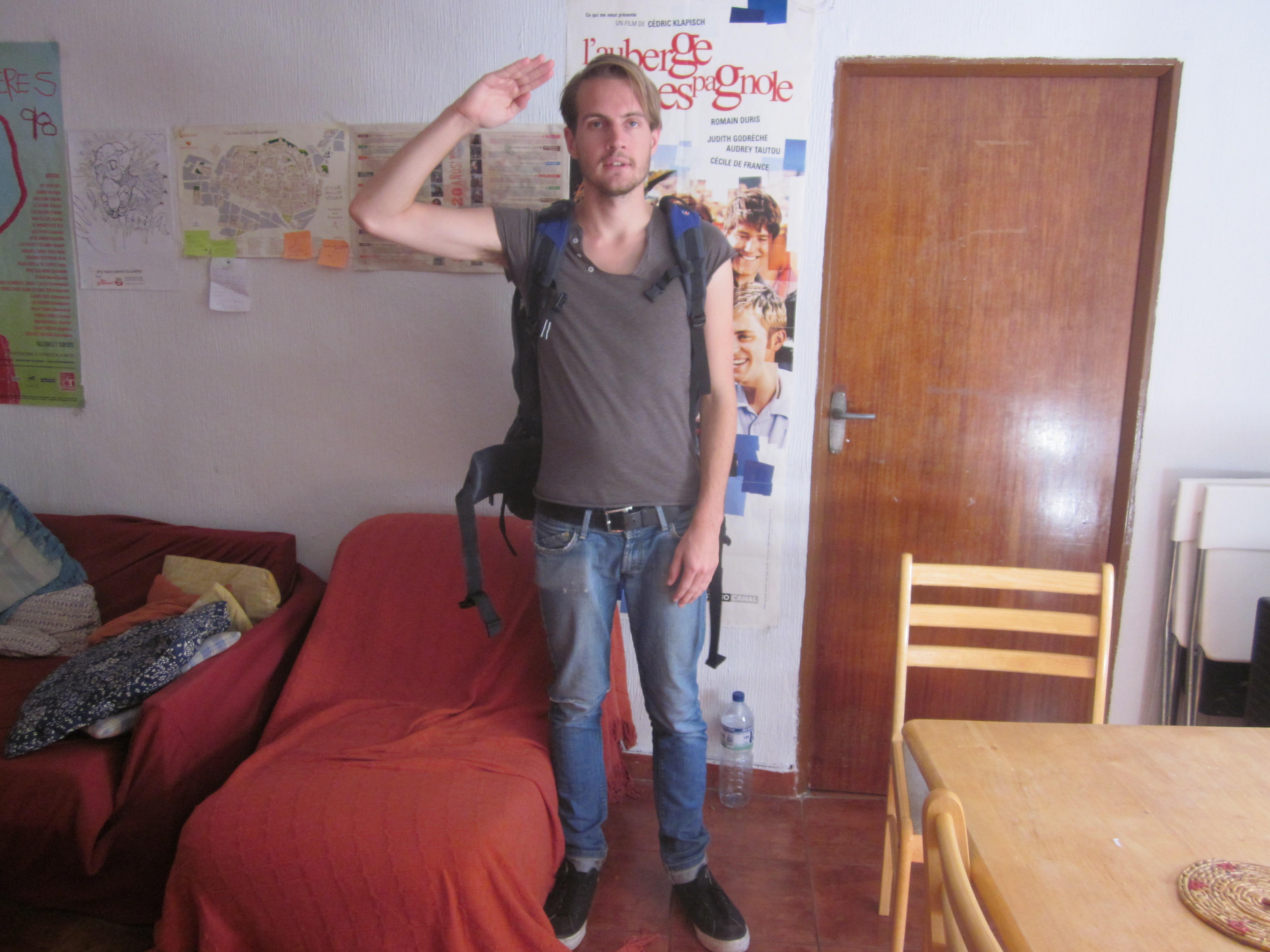